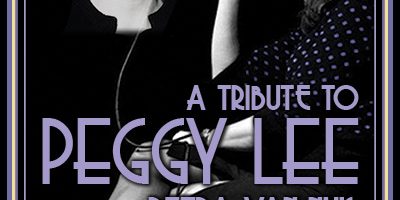 Join us for a musical tribute to the legendary Peggy Lee by stalwart Chicago Jazz vocalist Petra Van Nuis.

Jazz and pop singer, songwriter, composer, and actress, over a career spanning seven decades. From her beginning as a vocalist on local radio to singing with Benny Goodman’s big band, Lee created a sophisticated persona, writing music for films, acting, and recording conceptual record albums combining poetry and music. Lee recorded over 1,100 masters and composed over 270 songs and has influenced a broad range of performers, from Paul McCartney and Elvis Costello, to Beyoncé and Billie Eilish.

Petra van Nuis is a jazz vocalist who has been described in Downbeat Magazine as having “a light, gorgeous, and fairly delicate voice…a gift for melody and plenty of rhythmic confidence.” Petra performs regularly at Chicago’s prominent venues including the Jazz Showcase, the Green Mill, Winter’s and Andy’s Jazz Club. Petra has recorded five CDs, three of which have been re-released in Japan and used as in flight music for All Nippon Airways flights.