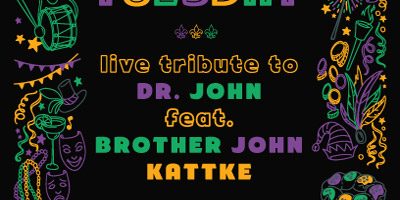 Dr. John first became a star by taking the sounds and traditions of New Orleans blues, jazz, and R&B and twisting them into new forms.

Throughout his career, he was widely recognized for his skillful and soulful approach to keyboards and guitar, with dozens of recordings on many labels over six decades, and literally thousands of shows across the globe.

Brother John Kattke  has been a resident musician at Buddy Guy’s Legends in Chicago for 30 years. For more than a quarter of a century he has scoured the clubs of the city, taking turns on guitar or keyboards, when he’s not directing studio horn arrangements or playing keyboards on some albums, such as the latest Toronzo Cannon release, “The Chicago Way.” He has played with Eric Clapton, Steve Miller, the Black Crowes, and acquired ringing endorsements from many other musicians of renown.