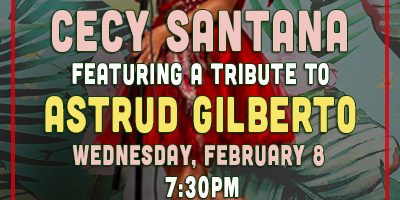 Join us for an evening of Bossa Nova and pop classics as Brazilian songstress Cecy Santana and her group pay homage to Astrud Gilberto.

Brazilian singer Astrud Gilberto burst onto the scene in 1963-4 alongside then-husband João Gilberto and American saxophonist Stan Getz, when she sang “Girl from Ipanema” on the now legendary Getz/Gilberto album. The album knocked The Beatles from the number one spot and introduced the world to the lilting swing of Brazil’s bossa nova. Beginning as a singer of bossa nova and American jazz standards, Gilberto started to record her own compositions in the 1970s. She has recorded songs in Portuguese, English, Spanish, Italian, French, German, and Japanese.

A native Brazilian, Cecy Santana is equal parts samba, jazz, funk, rock’n’roll and pop. Born into an enormously musical family and hailing from Sao Paolo, Santana’s music and videos have been in the charts for the past several years, propagated by the works of Triple Heat, Cecy Santana Band, and The Lotus Kings.